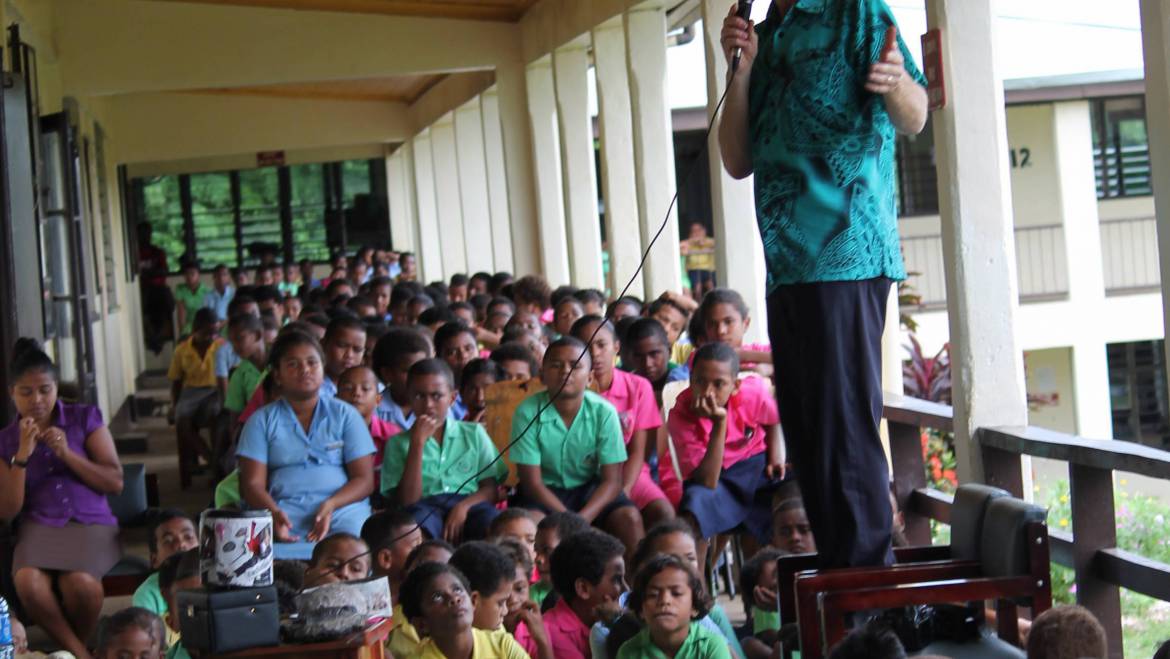 I have been on dozens of mission trips, including one to Fiji two years ago, yet the response and impact was significantly greater this time.  What made this mission trip so effective, and why was the impact so much greater than previous trips?  I believe a perfect combination of factors occurred to make this trip uniquely effective.

First, we worked with a missionary who spent the last 22 years in Fiji and understood the people and trends of the nation.  He understood that there was openness to the Christian message but that the children of the nation were being driven away from biblical truth by their evolutionary curriculum and ungodly Western influences.   He also understood the importance of connecting the spiritual aspects of the Bible to history, science, and reality.

Second, the educational system in many countries has moral people in leadership but they are seldom approached with the opportunity to bring qualified speakers with a scientific background into their schools to hold assemblies that connecting the Bible to science.  Only America and Western nations legally prevent this connection from occurring.  Third world countries are quite open and, even welcoming, to this opportunity.  Kory Mears, our Fiji missionary host, realized this, approached Fiji’s national Minister of Education, and received approval for us to teach in school assemblies across the nation.  Having highly qualified, experienced, flexible, and interesting speakers was critical.

Third, if this had simply been a one-hour assembly, the impact may have been significant, but not long lasting.  A key to being allowed into the schools was each student receiving a copy of Inspired Evidence. This easy to understand devotional ties what students are learning in their textbooks to God’s Word and created enormous excitement.  By leaving students with this book, and every school with an extensive creation science library ( resource books, hundreds of meticulously documented PowerPoint presentations, and Lessons 1-7 of The Rocks Cry Out creation video curriculum), a lasting impact was established.  All schools were given permission to copy and share the materials.

Fourth, every assembly ended with an opportunity to accept Jesus as their personal savior.  In this culture the students knew about Jesus but many had not been challenged to make Him their savior.  The opportunity to do so was met with widespread acceptance.  “Don’t you have a saying, ‘It’s still four months until harvest’?  I tell you, open your eyes and look at the fields! They are ripe for harvest.” – John 4:35

If this same method could be used in other countries, the impact of Christianity and the Bible would be magnified many times.  For too long, the enemy has used public education to drive the children of nation after nation away from trust in Him.  It is time for Christians to take back this ground and my experience in Fiji has proven that this is an extremely effective method of bringing the gospel to a nation.  For  a 5 minute video review of the trip see our video post on facebook: