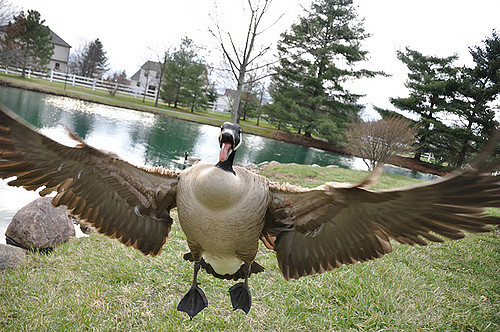 Last Spring I observed a pair of Canada geese swimming along with six newly hatched goslings.  Suddenly a dog ran at them and the goslings dove under the water, scattering in all different directions and popping up moments later in different parts of the pond.  Meanwhile, the parents swam directly at the dog, started flapping their wings, and hissing ominously.  The comical escapade raised numerous questions:  How did the baby geese know to scatter in different directions rather than stay together?  Why would the adults put themselves at risk in order to protect their young?  If the first foolish goose to try this was killed, how did its young survive?  How does knowledge learned in one generation get transferred as a born instinct?  In summary, where do instincts come from?

Evolution notes that instincts are useful for survival and therefore assumes they evolved to help an animal.  This sounds like an explanation but it is actually storytelling and circular reasoning, NOT science.  Evolution believers assume that evolution is true, use the word “evolution” to explain a useful feature or behavior of an animal, and then tells students that because this feature or characteristic exists, it proves evolution. This is like saying a jet airplane has superior speed compared to a paper airplane and this proves that the jet plane evolved from a paper airplane via random changes to the paper airplane manufacturing facility.

The problem for evolution is that learned behavior is not transferred from generation to generation.  Try teaching your dog a complex behavior such as shaking hands, rolling over, or bringing you the newspaper from the front porch.  Once your dog has pups, give the pups the same command.  They’ll cock their heads and look at you like you are crazy.  Not once in a billion tries will the behavior learned by the parent be automatically transferred to the offspring at birth.  This is scientific reality.

Creation on the other hand acknowledges that these advanced skills, which seem to be implanted in an animal’s consciousness, were placed there by the same entity which formed the physical structure of the animal’s body.  Thus instincts perfectly match an animal’s needs and abilities.  The reason animals are born with these skills and parents are born with the ability to teach their offspring the necessary survival skills is because these instincts are pre-programmed at birth.